Everything music, hosted by DJ Ricky Jay & DJ Bling from Los Angeles, California. Each broadcast / podcast, we bring you new tracks, upcoming and established artists, and a behind the scenes look into the latest music, fashion, & lifestyle trends. Look for our Podcast in the iTunes Store. 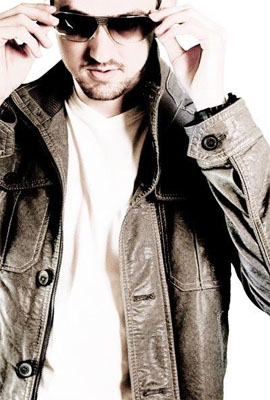 He is an artist that has spun for audiences on radio that have amounted to over 600,000 listeners on any given weekend; he has headlined countless clubs in Santa Barbara, Hollywood, San Diego, and Las Vegas, he has provided music for celebrity private parties for such stars like Pamela Anderson and Tommy Lee, and has produced mixes that defy description, that artist is

Growing up in the suburbs of Newbury Park, California, DJ Bling was exposed to different genres of music at an early age thanks to the assortment of music provided by his family. From Motown greats such as The Jackson 5, Stevie Wonder, and Marvin Gaye, to the classic rock styling’s of The Rolling Stones, the foundation of DJ Bling’s unique style was being laid down before him one piece at a time.

At the adolescent age of sixteen, DJ Bling would begin to hone his craft on a pair of belt driven turntables using old vinyl records as his medium. With such top DJ’s like DJ Q-Bert, The Beat Junkies and DJ AM as influences, a strong foundation was being built for the young DJ to further his skills at an amazing pace. By the age of nineteen DJ Bling would conquer another major facet of the dj world, radio. DJ Bling’s skills were so polished that he was granted a position at Q1047 as one of the Club Q weekend mix show dj’s, a position only reserved for dj’s at the top of their game. From this milestone DJ Bling was exposed to audiences ranging in the hundreds-of-thousands on weekly basis, and was able to bring his eclectic mixes to a citywide range.

In short, there are many dj’s out there, but very few artists, DJ Bling is more than just a DJ, he creates vibes, defies genre, destroys expectation, and dj’s with a confidence and swagger that can not be taught. DJ Bling is a true master of his craft who does more than just play music for a crowd, he makes the music sing to your soul.

Born and raised in the suburbs outside of The City of Angels, Los Angeles based DJ, Ricky Jay is anything but small town. At a young age, Ricky Jay gained much of his musical influences through his father, a seasoned product developer in the professional audio industry for notable companies such as JBL, Harman, and Marantz. Ricky Jay’s DJ career began during the vinyl era of the late 90s where he discovered his love for the art of scratching and turntablism.

Much of Ricky Jay’s mixing style is attributed to the influence of fellow Los Angeles DJs and idols, P-Trix, Z-trip, and Mr.Choc. An open format DJ, Ricky Jay plays a wide variety of music that he skillfully tailors to all of his crowds on any given night. “It’s not what you play, its how you play it,” says Ricky Jay. As a winner of several DJ battles, Ricky Jay uses his vast knowledge of mixing techniques to add a unique funk and flare to his performances that sets him apart from today’s amateurs. “Programming is key,” he says, which is why Ricky Jay is always in-tune with his crowd and able to customize his mixing accordingly to suit anyone and everyone.

With over a decade of experience under his belt, Ricky Jay has played all over Southern California covering venues from San Diego to Santa Barbara. Prior to his International debut in Canada in 2010, Ricky Jay has also held a yearlong residency on the famous strip of Las Vegas at the exclusive Foundation Room and legendary Rum Jungle. Besides the nightlife, Ricky Jay has performed live on stage with bands and artists such as Incubus, Warren G, Too Short, The Game, and more. In addition to nightclubs and concerts, you can find Ricky Jay providing live sounds for popular retail stores such as Nordstrom, Guess, Metropark, and the famous Primitive Shoes in Encino, California where he is backed and supported by it’s owner and professional skateboarder, Paul Rodriguez.

Currently, Ricky Jay is constantly practicing in the studio and working with many DJs such as DJ Kilmore of Incubus. Whether it is a new scratch, mix, or track, Ricky Jay is always keeping his music and skills fresh. His ongoing projects include Dropping Needles, an “up-tempo sneak peak to music” Podcast in which he partners with close friend DJ Bling of Los Angeles. With over 10 mixes since the start of 2012 and going strong, Dropping Needles has featured popular guests such as Mistermike, Quix, and Panic City, with many more to come.